Today is going to be a special announcement as we have finally resumed our roots and have hired a bagpipe for Strynn!
Ok. Now you can put away your torches or burn something other than our faces.

So, as I was saying, Strynn now has a bassist *Osprey cry* After having thought about the negatives for a long time, certain songs sound way better (or worse, it’s a question of point of view) with the solely 4 stringed instrument (the weak one).
Voila, we have now become a little more mainstream. Taking away our last touch of originality, we’re giving you another reason to hate us.

Anyway, it cleary won’t stop me from spitting on bassists (at least we were lucky enough to fall upon a talented one!) 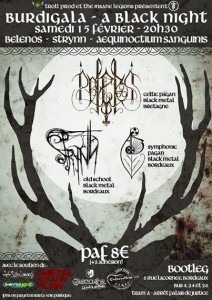 We play the 15th of february for a rotten show with Aequinoctium Sanguinis and Belenos at Bordeaux (at well named showroom Bootleg).

For the occasion, because we played with a lesser bad band as the others, we changed our setlist to play a lot of new songs, if you are not interested, I understand. For the others, you can get more informations on the Facebook event.

For now, you have nothing more.